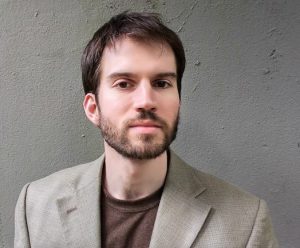 Jeffrey Bowen is a composer and guitarist currently living in Seattle, Washington. His compositions feature gradually evolving processes and explorations of liminal spaces, and have been performed by Pascal Gallois, Maja Cerar, Beta Collide, Ensemble DissonArt, and the Luminosity Orchestra, among other artists and ensembles in the USA and Europe.

In 2013 his orchestral work Stalasso was chosen by conductor Ludovic Morlot for the Seattle Symphony Orchestra’s New Music Works program, and he has recently presented work at the Darmstadt Summer Courses for New Music, the University of Nebraska’s New Music Festival, the University of Washington’s Harry Partch Festival, the New York City Electroacoustic Music Festival, the International Computer Music Conference, and as a resident artist at the Atlantic Center for the Arts. He was awarded First Prize in the 30th International Composition Competition “Città di Barletta,” and an Honorable Mention as a finalist for the The American Prize in Composition in 2021. In 2019 he received a Jack Straw Artist Support Grant to record his piece for the Harry Partch Instruments, Where All That’s Solid Melts Into Air, and his work What Will Sound (was already sound), for violin and electronics, was released by Parma Records in 2020.

Bowen was born in 1987 in St. Louis, Missouri, where he studied classical guitar with William Ash from 1996-2006. He received a B.A. from Stanford University, where he studied classical guitar with Charles Ferguson and composition with Jaroslaw Kapuscinski and Mark Applebaum. He completed a D.M.A. in composition from the University of Washington under Joël-François Durand, and is currently based in Seattle, where he has taught courses in music history and theory at UW and Cornish College of the Arts, currently teaches music theory and guitar at Seattle University, and is co-director of the Inverted Space Ensemble. He is active in Seattle as a performer on classical and electric guitars, playing new works and 20th-century repertoire with Inverted Space, the Seattle Modern Orchestra, Universal Language Project, Seattle Metropolitan Chamber Orchestra, and recently as a soloist with the UW Wind Ensemble and Tacoma’s Luminosity Orchestra.